This white paper discusses the use of linking digital radio sites using T1/E1 links rather than the more common IP based links. The connection of various digital repeater systems discussed with test setups and results are provided.

T1 or E1 links provide a cost effective alternative and can be used to link multiple repeaters on an individual site.

Most digital radio repeaters have an Ethernet port to allow direct connection to other network elements (other repeaters, repeater sites, network management and dispatch).

The T1 is used in the US and can transmit 24 telephone calls simultaneously. As the calls are transmitted digitally with each call using 64kb/s the T1 is a link that carries a data throughput of 1.544MB/s.

Outside of the US the standard used is E1, which carries 32 calls and therefore has an overall data throughput of 2.048Mb/s.

T1 and E1 are not compatible, but many devices such as the ones from TC Communications are compatible with both standards.

Where an IP connection is available, setting up and connecting to a radio network is quick and easy. In this case the term "digital repeater" is used as a generic term for any digital format such as P25, DMR or dPMR (NexEdge).

The IP Connection is often provided via an ISP, fiber, or microwave link but one that can sometimes fly under the radar is the use of T1 links to connect radio systems.

T1 lines are generally available in much of the US and are a cost-effective solution for linking radio sites. As a typical digital radio system uses less than 40kb/s per channel, you can connect multiple repeaters at a site to a single T1. However in order to achieve this, you will need to use a converter such as the TC Communications TC3844-1 Ethernet to T1 converter, as the T1 lines do not connect directly to the Ethernet port of the repeater as T1 is not natively IP compatible.

A typical setup is shown below:

Most Ethernet to T1 Conversion devices have more than one Ethernet port which allows the connection to multiple repeaters without the use of a switch. In the above example 4 digital radio channels can be connected without the use of a switch, however if there is a need for more repeaters, the addition of an Ethernet switch allows for easy connection of more repeaters. Based on typical specifications, 20+ digital channels can easily be supported using a single T1 link, making this a very reliable and cost effective solution.

The T1 signaling is synchronous, very reliable, and exceeds the latency and jitter requirements of various digital systems. A comparison of link options is provided in the following table. 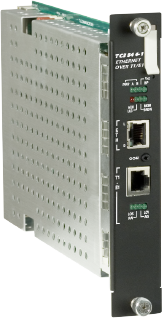 To test the TC3844-1 we used two modern trunking systems from Hytera and the associated dispatch solution (SmartOne). The trunked systems used were XPT, which is transmission trunked and DMR Tier 3, which is message trunked. This combination is typical of digital radio technology, including competing technologies to DMR such as P25 and dPMR.

In this case the 'IP link' was simply an Ethernet cable providing minimal delay, so part of the testing was to see if there was an increase in digital delay by using the T1.

Initially we simply replaced the IP connection with the T1 based Ethernet connection:

This worked immediately. As soon as we replaced the link with the T1 based solution, the system instantly became operational and the Network Management System reported all the linking to be within the expected limits.

We then eliminated the switch as we had two repeaters and the TC3844-1 has two Ethernet ports. The test setup looked as follows and worked exactly as before.

We placed multiple simultaneous voice calls through the dispatcher and the audio was crisp, clear and there was no increase in delay by using the T1 link.

We did not have 20 repeaters on hand so we did not test the limitations of the number of repeaters that could be linked using the T1, but as the XPT system does not have a central audio switch, it is quite data heavy between the sites and so a T1 link is a good solution with the capability to link over 20 repeaters in the system.

The second system we tested was a DMR Tier 3 system. This is a message trunked system which also utilizes a central switching for the audio in inter-site communications. Based on this, the data requirements are lower, however the link with the control channel is required to have very low latency and jitter, leading to issues with some linking technologies, most typically seen with LTE based Ethernet linking devices.

Setup was as follows:

As we did with the XPT Trunking system, we initially replaced the IP link (again this was a simple Ethernet cable) with the T1 link.

Once again, as soon as the system was connected it operated perfectly. There were no link alarms and the links were well within the required parameters. Multiple calls from the dispatcher were setup and again there was no increase in digital delay across the system.

We would've liked to have tested the T1 as an MSO to BSCU link, but in the setup we were using, these were installed on the same server so this was not possible. Based on the required specifications, we are certain that this will work reliably and well within parameters.

The T1 is a very good choice for connecting digital radio networks, however this option may be overlooked because the T1 is not directly compatible with the IP/Ethernet connectivity of most digital repeaters. The use of devices such as the TC3844-1 to interface between the repeaters and the T1 allows a user a cost effective and reliable option for site linking that otherwise may not be considered. 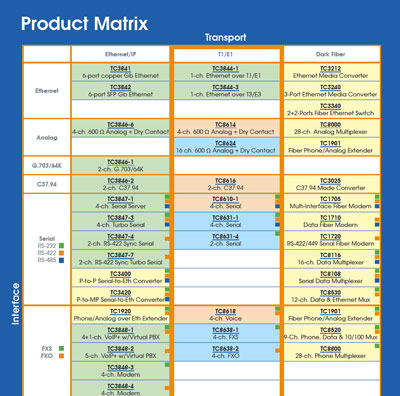 As well as providing Ethernet over T1, TC Communications provides a wide variety of solutions for connecting legacy devices over T1.