With the JumboSwitch, the local telephone system (including the trailers) was highly mobile. With minimum notice, it could be picked up and transported to another base and easily connected to the existing “core” network at the new location.

Security was also an important issue. Because the JumboSwitch’s virtual PBX function did not require a central hub or SIP server, it provided secure and reliable telephone service on the Battle Group’s existing LAN. Moreover, it provided all popular call processing features and enabled all connections between any FXS-FXS and FXS FXO network channel.

Specifically, the Battle Group installed seven Model TC3848 4-port Virtual PBX interface cards in a 4U chassis at the CCC and single cards in a 1S chassis in the field trailers. This topology allowed up to 35 FXO connections to the DSN over the existing network LAN via 10/100Base-T links. 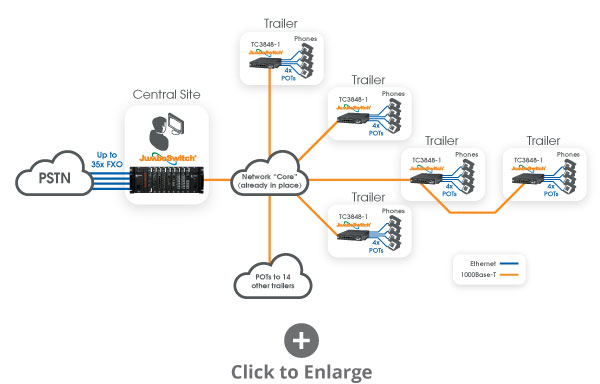