Faced with an immediate need to replace older wayside Vital Controllers that had been in service for more than 15 years with newer Controllers, a large West Coast Light Rail system (the Metro) decided to also upgrade its signaling and communications fiber optic network at the same time.

Its primary goal was to deploy a more flexible and scalable Ethernet-based communications platform that would easily support future growth and expansion. Moreover, it wanted to find a reliable platform that would support its legacy serial connections to vital controllers in addition to installing IP/Ethernet connections to new controllers they would deploy in the future.

One notable challenge was to find an Ethernet-based communications platform that would support the RS422/485 handshaking requirements of the MicroLok II* Control System for railroad and mass transit wayside interlocking equipment. Existing communication network links to controllers were TDM based.

An initial proposal calling for point-to-point Ethernet Switches and Serial Servers was soon discarded because of several important limitations including: 1) it didn't support handshaking signals; 2) it didn't offer redundancy; and, 3) it offered minimal flexibility for long term growth.

According to one network manager, the JumboSwitch was a proven commodity because it had been successfully deployed in similar applications (e.g. Los Angeles Metrolink, Melbourne Metro Australia and Canadian National Railway) and it provided a unique RS485 interface with handshaking that was required by the upgraded vital controllers. In addition, it supported all of Metro’s additional legacy serial connections to vital controllers as well as Ethernet/IP connections to new controllers in the future.

The JumboSwitch’s multi-service TDM over IP/Ethernet capability preserved the Metro’s existing legacy network and will enable it to expand or build out the network (and add Ethernet devices such as cameras, IP phones, etc.) at its own pace over the coming years. The JumboSwitch also enabled the Metro to condense three of its existing fiber rings into one fully redundant fiber ring network.

When the installation is completed, a total of 20 nodes with JumboSwitch 4U chassis units, each populated with two RS232 [4 ports each] and two RS485 [2 ports each to accommodate DB9 connectors] serial interface cards (see Fig 1. network block diagram), will be deployed to link vital controllers and computers at multiple signal houses and stations.

For redundancy, each JumboSwitch unit will have two duplicate Master/Slave cards. Configuration, administration, monitoring, and troubleshooting of the JumboSwitch network will be handled by the JumboSwitch’s IP-based network management management system, TCView®. 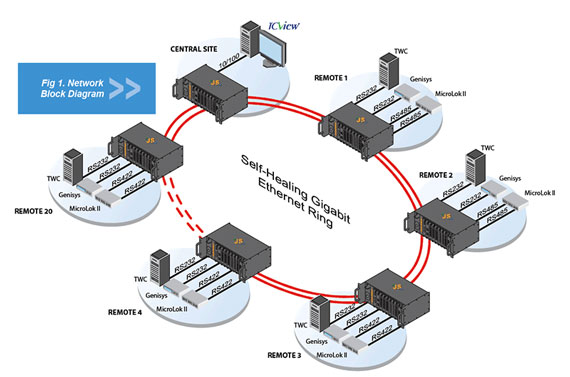 *MicroLok II is a registered trademark of Ansaldo STS