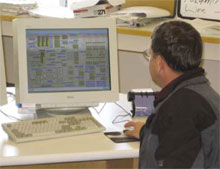 However, when the system was implemented in late 2004 it became apparent that it needed some upgrading. According to Charles Aycock, Electric Maintenance Coordinator with the City’s Environmental Utilities Department, Operators immediately began complaining about the slow speed of the remote workstations.

“Workstations at the remote locations bogged down noticeably...even when the surveillance cameras were not online. Operators would click on a graphic interface (SCADA) and wait 3 to 5 seconds for each screen to refresh.”

Because of the slow screen refresh times, Charles said that it often took operators several minutes to make routine adjustments such as controlling dewatering pumps or adjusting chemical dosing levels.

Further investigation revealed the source of the problem: the graphics (software) for the treatment process required considerably more bandwidth than originally anticipated during design. The process screens that were developed contained more dynamic data and symbols as the operations staff determined their process control needs.

“The SCADA system passed all performance criteria for static and dynamic graphic update times; however, the testing criteria was defined for less than 40 percent of the information that was eventually depicted on each process screen,” Charles explained. He also noted that the manufacturer of the OCMs acknowledged that their product was never intended to pass the volume of network traffic as required by the SCADA system.

Initially, 10 Mbps half-duplex Ethernet Optical Communications Modules on a redundant ring were used to provide the communications transport for the workstations and cameras. The OCMs were fault tolerant and would automatically switch over to a second pair of fibers in case of a fiber optic cable failure.

Dedicated in 2004, the Pleasant Grove Wastewater Treatment Plant has a capacity of 12 million gallons a day and serves the city of Roseville, California and surrounding communities.

Research by Dan Mazorra of Carollo Engineers determined that TC Communications had a product that would meet PGWWTP’s needs. As a result, he suggested a new redundant fiber network that would use TC’s Model TC3820 Redundant Ring Gigabit Ethernet Switches to support the workstations and surveillance cameras.

The solution was theoretically sound; however, the existing multimode fiber optic cable presented an obstacle in terms of available bandwidth at gigabit speeds (1,000 Mbps). It turned out that the 1,100 feet between the Ethernet switch in the Administration Building and the switch in the Influent Pump Station exceeded the 275 meter maximum range for standard Gigabit Ethernet networks (IEEE’s 802.3z 1000BASESX Ethernet Distance Parameter specification). The OCMs did not encounter this problem because they fell well within the IEEE 2 km specification for 10/100 Ethernet. 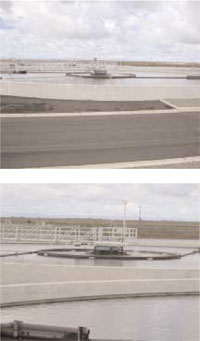 “We encountered the distance problem when we initially tested standard versions (850nm) of the Ethernet Switches,” Charles explained. “They were right on the edge…sometimes they worked, sometimes they didn’t. I called Nick Lee (Technical Sales) back at TC Communications and he suggested using the special long distance version of the TC3820.

“The distance multimode fiber versions tested perfectly and we didn’t look back.” (Note: the 1300nm multimode long distance TC3820’s support distances up to 2 km over 50/125 or 62.5/125 multimode fiber.) PGWWTP’s fiber optic communications network is a ring topology that consists of 24 strands of 62.5/125 multimode fiber. It connects 7 workstations and 8 “Pan, Tilt & Zoom” cameras in various buildings and locations on plant grounds to the central computer room in the Administration Building (see diagram).

“The operators were ecstatic with the new system,” PGWWTP Chief Operator Bob Lawrence said. “They were able to make changes on the fly at any of the workstations and we could finally get useful images from the cameras.” Charles noted that the camera images capture rates were previously slowed down to seconds per frame instead of normal video capture rates in frames per second in order to minimize impact to the SCADA workstation network.

PGWWTP also plans to connect the alarm dry contacts on the rear of the TC3820’s to various Programmable Logic Controllers (PLCs) throughout the system. This will tie the TC3820’s into the SCADA system and alert PGWWTP operators if there is an alarm condition. It will also pinpoint the network location of the fiber optic cable or equipment failure. (The redundant feature of the TC3820s provides for automatic switchover to the secondary data path in less than 50 milliseconds).

Charles was noncommittal when asked about future plans but did say that “there is enough bandwidth to hang just about anything we need on the network.”

Dedicated in 2004, the Pleasant Grove Waste Water Treatment Plant has a capacity of 12 million gallons and day and serves the Roseville, California and surrounding communities.